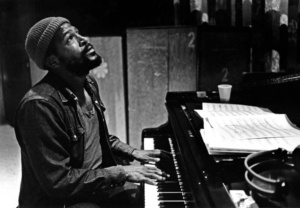 Hear the Motown icon dip into tripped-out funk and blues on the first standalone release of Funky Nation.

Despite being a cornerstone of the Motown empire, the tragic loss of his singing partner and collaborator Tammi Terrell in 1970 left Marvin Gaye reluctant to hit a stage of any sort the following year. Even with his masterpiece, What’s Going On, out and receiving rave reviews, Gaye refused to tour in support of the album. In fact, to this day, the only performance of What’s Going On in its entirety arrived almost exactly a year after it was released when Gaye was honored with a commemorative day in Washington, DC. And even that performance at the prestigious Kennedy Center took some convincing from his mother.

But the downtime wasn’t lost at all. Instead of hitting the road, Gaye returned to Motown HQ in the summer of 1971 to cut a tripped-out instrumental album with a number of future stars of fusion and funk. And this week, in celebration of What’s Going On passing the half-century mark, that album, dubbed Funky Nation: The Detroit Instrumentals, has finally been treated to a release. On the 14-track collection of psychedelic instrumental suites, Marvin Gaye is joined by the late Hamilton Bohannon on drums, Ray Parker Jr. (17-years-old at the time,) Wah Wah Watson, and Leroy Emmanuel on guitars, as well as a 20-year-old Michael Henderson on bass.

A handful of tracks from the album were released on prior special editions of albums and the full collection was featured in the “super deluxe” 40th-anniversary edition of What’s Going On, but this is the first time Funky Nation has been released digitally as a standalone album.

You can stream Marvin Gaye’s Funky Nation: The Detroit Instrumentals below.