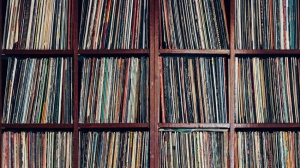 “Even back when I owned nothing I had a stack of records. They understood my moods, gave voice to feelings that I didn’t have my own words for, and provided company and solace when “this old world starts getting me down and people are just too much for me to take.” They were a common connection not only between friends but an entry point with new people, bridging across generations, races and ethnicities.

Those 12-inch squares were art when I had nothing to put on the walls. They were sociology, anthropology, and cultural studies that helped explain the world. When it came time to move the record player was the last thing unplugged and packed and the first thing set up.

Over time as my collection grew most of the discs took on an historical relevance and were touchstones to memories, places, people and feelings. I invented genres not found in record stores but that most people understand; such as ‘music to clean house by,’ or ‘music to swoon to.’ But of course anyone who’s had a serious record collection knows that they take up a lot of space and weigh a ton, especially when it’s time to pack up and move.

Less than 4 years ago, I think I had over 2000 records but circumstances have pushed me to shrink it down to slightly over 125. I’m not happy that I let all those children go into the world. I miss them but I felt it was something that I had to do. I don’t expect people who grew up only with CDs or worse with file sharing, iTunes, digital bytes to understand the deep attraction. Long gone is the tactile dimension of music. Listening habits have changed. Listening parties are an anachronism.

Records were probably my first love. They were my friends when I felt friendless. They helped keep an ember of romance burning and a hope for a peace when the world felt cold. It’s kind of lonely looking at my little stack of 125+ friends, but they will have to be strong and carry the reminders of what they all represented.” —Matthew Goldwasser, host of The Jazz River on Sundays at 5 pm.