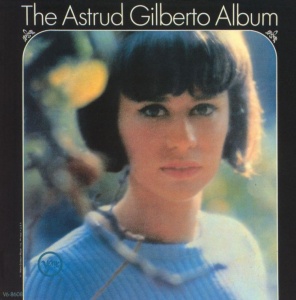 This album was Astrud Gilberto’s debut album and became an ‘accidental success’ after her recording of ‘Girl from Ipanema’. Astrud was not considered an ‘experienced’ singer in the studio (however, she grew up with music and both her parents were musicians). With her sweet soft vocals music, critics were unsure if she could sustain a career in music. However, the public decided otherwise and there is no denying that her music is still played and enjoyed to this day! The album includes Bossa Nova classics such as ‘Aqua De Beber’ and more. This album was also listed on NPR’s “150 Greatest Albums Made by Women” list!

Astrud Evangelina Weinert was born on March 29, 1940 (she is still alive!). “Her fame brought unfair criticism from journalists back home. “Many established Brazilian musicians never accepted Astrud’s success. They portrayed her as lucky rather than talented, in the right place at the right time,” said Bryan McCann in his book Getz/Gilberto.

Astrud later said she was “very hurt” by the “harsh criticism and unwarranted sarcasm” she received from reporters in her homeland. Newspapers publicized rumors that she was involved in a romantic liaison with Getz. She never sang again in Brazil and was not present when “The Girl From Ipanema” was used in the opening ceremony of the 2016 Rio Olympics.

Astrud was never comfortable being labeled as a ‘Jazz Singer’ “What is a jazz singer?” Astrud Gilberto via The New York Times in 1981. “Somebody who improvises? But I don’t: I prefer simplicity. I’ve been told that my phrasing is jazz-influenced. My early albums were recorded for a jazz label, Verve. My first record was with Stan Getz. And I did an album with Gil Evans. So I guess that’s where the jazz idea comes from. But I’m not a pure jazz singer.”

I think we can all appreciate the incredible vocalist Astrud truly is and how she innovated Bossa Nova music to this day. Her sweet and soft vocal tone is something modern singers try to imitate in the modern day. Astrud is a significant part of Latin Music History as well as Music History in general!

Tune in to KUVO JAZZ for a celebration of the “LP,” June 1 through 15. KUVO hosts will be sharing their record stories and favorite album art, plus random reflections on decades of record-related encounters. 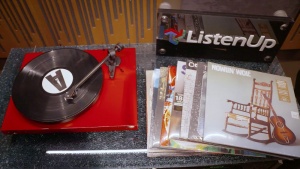 We invite you to enter our Record Store Day drawing today and tell us your record story!

The winner will receive the following: 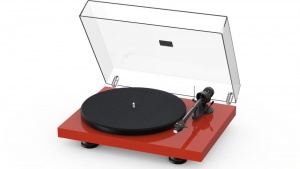 In the before times, the music went out to the masses via the disc – black lacquer, pressed with grooves that transmitted sound through a needle to hungry ears, stamped with a colorful label, pierced precisely with a hole measuring 9/32 of an inch (1.5 inches for 45 rpm singles).

Of course, the music was the main attraction, but it didn’t take long for marketers of the LP to create a package that was a sound-and-sight experience: album covers with original, commissioned artwork and photography, literary and entertaining liner notes, printed sleeves, colored vinyl, punch-out mobiles, stickers, posters, and LYRICS!

Fully enjoying the LP was an experience: unwrapping the album and inhaling the fresh ink and vinyl, dropping the needle on the edge of the platter, turning the stereo up LOUD, sitting down for Side A, getting up to turn the disc over for Side B, and taking it all in while you pore over every word and image on the jacket.  My favorite artists always included graphic treats and word puzzles along the way.  A whole vocabulary arose around the medium of the record.  Hipsters wanted to be “in the groove,” and “groovy” was a most positive accolade.  DJs promised “more platter,” “stacks o’ wax,” and “mounds of sounds.”  Later, with hip-hop, the sound of the needle forced back-and-forth on the record wasn’t a gag or a mistake; scratching was part of the rhythmic texture of the song.

Radio stations have had to keep up with all the technological developments of musical conveyance, the CD, and now digital storage and playback, plus a few formats you may not even have heard of – DAT and MiniDisk.  But the affection for the jazz LP has never waned.  Every public radio station I know of has a few record mavens on the airstaff.  KUVO Jazz has Mike Wulfsohn’s “Wulfy’s Wax Museum” (Mondays at 8:30 p.m.), Geoff Anderson’s “Vinyl Vault” (Tuesdays at 8:30 p.m.), Rodney Franks, JJ, Adam Morgan, Djamila Ricciardi, myself and a few others.

It’s probably not on your calendar, but if you’re a music lover, it should be: Record Store Day.  There are two Record Store Days this year, the first of which is Saturday, June 12.  For a few of us around KUVO Jazz, it’s in our planners, we’ve saved up, and we’re ready to do some serious crate-diving.  But why wait?