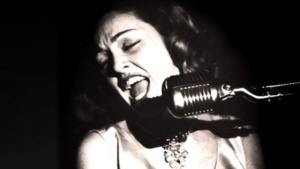 Anita O’Day joined Gene Krupa’s big band in ’41, and in ’42 Down Beat magazine named her “New Star of the Year.” But it was her performance at the Newport Jazz Festival in 1958 that make her an international star.  The outdoor event was documented in the film “Jazz on a Summer’s Day.”

Tune in on Friday, October 18 for a musical celebration honoring the centenary of Anita O’Day.

Helen Akitt’s liner notes in the three-CD set Anita O’Day The Verve Years 1957-1962 mark her incredible productivity, two or three albums a year.  The collection contains 75 tracks.  Over her career her collaborations were stunning, beginning with her duet with Roy Eldridge (in the Krupa band), and later Oscar Peterson, Bllly May, The Three Sounds and others.  She was a master of scatting, perhaps due to her missing uvula from a botched childhood tonsillectomy.

O’Day’s arrest record included several busts for weed, including at the L.A. house party where Dizzy Gillespie was playing the trumpet from a tree! For insight into her bouts with liquor and heroin, O’Day’s autobiography High Times, Hard Times is her own frank approach to the topic. Her 60-year career is portrayed in the documentary film “Anita O’Day – The Life of a Jazz Singer,” which was finished just weeks before her passing in 2006.

It wasn’t her clarity, though she was crystal clear. She wasn’t raspy until toward the end of her career. She didn’t sing long notes. As with the greatest vocalists, it was her phrasing, her convincing delivery that make you feel cool just listening to her. Anita O’Day deserves a centennial celebration.