Charles Mingus a towering figure in Jazz was born on April 22, 1922. We are celebrating the 100th anniversary of his birth.

A true virtuoso bassist who studied double bass for five years with H. Rheinshagen (principal bassist of the New York Philharmonic) and compositional technique with legendary composer and educator Lloyd Reese, while absorbing Jazz from Red Calendar, Louis Armstrong, Lionel Hampton, and Kid Ory. Eventually, he settled in New York where he fell in with the likes of Charlie Parker, 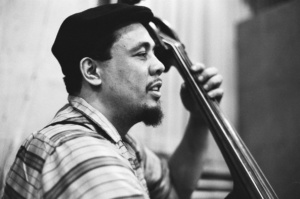 Bud Powell, Art Tatum, and Max Roach. Mingus displayed leadership qualities and became an important bandleader and was good enough playing the piano that he could have chosen to play piano as a career. Having grown up with only church music it soon informed his iconoclastic music that also became known for its Avant-Garde sensibilities and also compared to the Third Stream movement mixed with Hard Bop.

In Jazz, it is rare for a musician to remain relevant considering the myriad of stylistic changes that characterize the music but Mingus stayed at the forefront throughout his storied career. He wrote hundreds of compositions and is second only to Duke Ellington in musical output. He founded The Jazz Workshop, acted, wrote poetry, and wrote a heroic albeit partially fictional

Autobiography called “Beneath the Underdog”. Not unlike Miles Davis, Duke Ellington, and Art Blakey many musicians owe much to “The Baron”. His is a powerful legacy and The Mingus Big Band is more than a functioning “ghost band” his compositions are revered among Jazz cognoscente and he appears on several of the greatest jazz albums ever made. He is a recipient of awards, grants, and honors too numerous to mention outside of Wikipedia. He died too young for such a volcanic powerhouse. His music lives on.