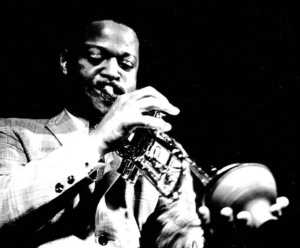 December 14, 2020 marks the 100th anniversary of Clark Terry’s birth! KUVO Jazz is celebrating the life and music of this trailblazing trumpeter, band leader, music producer and publisher, educator and NEA Jazz Master by playing tracks from Terry throughout the day.

“We’ve spoken with local players who knew and played or studied with Clark Terry, and Terry’s impact was profound,” said Franks. “Their memories were insightful. Their stories were priceless.”

At Terry’s induction as a National Endowment for the Arts Jazz Master in 1991, it was noted, “he was one of the earliest active practitioners to take time off from the road to enter the classroom, conducting numerous clinics and jazz camps. This work culminated in his own music school at Teikyo Westmar University in Le Mars, Iowa.”  Later, Terry was on the faculty of William Paterson University in New Jersey.

“CT championed me as my first trumpet teacher.  Terry generously taught music throughout his life and NEVER charged a student for a lesson.  This was his greatest gift.” – Quincy Jones 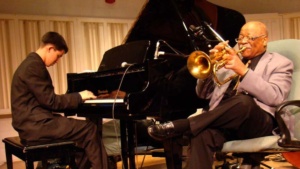 In honor of Clark Terry’s centennial and in cooperation with Quincy Jones Productions, beginning on December 14th, IMDB is streaming the jazz documentary “Keep On Keepin’ On” for free here.

For decades, Terry was in full stride as a performer and band leader, even taking gigs on commercial jingles. With his trademark work ethic, Terry told DownBeat in 1967, “you can’t say no—if you do, you get scratched off a number of lists. Going out of town, of course, is a good excuse, provided you don’t stay out too long.”

Terry was one of few artists to play with both the Ellington and Basie bands. In 1960, Terry became the first African-American staff musician with the NBC television network. He was a consummate showman. He played two horns at the same time. He played the flugelhorn upside down. He sang. His comedic trademark “Mumbles” was recorded several times, and performed countless times around the world.

Among Terry’s awards: a Grammy Lifetime Achievement Award in 2010, the French Officier de L’Ordre des Arts et des Lettres, a knighthood in Germany, and a star on St. Louis’ Walk of Fame.