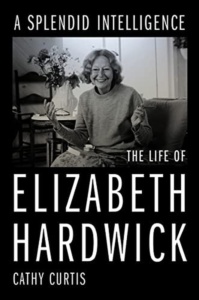 For this first biography of an essayist and critic, the author researched numerous archived letter collections. Prolific letter writers leave a storehouse of material for biographers to construct life stories. In a letter, events and corresponding emotions are documented, revealing a closer-to-the-truth reporting than can be found in summarized secondary materials (books and articles). The subject of this book, Elizabeth Hardwick, corresponded with her circle of writers, friends, literary husband, and husband’s family throughout her life. The biographer, Cathy Curtis, accessed those letters.

Elizabeth wrote essay, play, and short story reviews in addition to novels, and her published criticism was biting at times but not attacking. She would question the weakness of a character construct or the fit of a behavior in a specific scene or time period. She was not past taking down the new works of her writer friends–all part of being a professional reviewer–heaping praise on a book is for publishers to push sales.

In her Partisan Review (1954) piece titled “Riesman Considered,” regarding the writing of sociologist David Riesman, she does not hold back: “He is a cheerfully curious and lively observer, as free of ‘liberal piety’ as one of the teen-agers he is so much interested in.” Following that example, Curtis writes “In her inimitably down-to-earth way, she likened plucking out his ideas from his obfuscating prose to ‘the difficulty of extracting the meat from (lobster or crab) claws.’”

In a chapter titled “Literary Splash,” Curtis theorizes for a Hardwick position on the feminism/housewife spectrum. A popular contributor to periodicals like New Yorker, Vanity Fair, New York Review of Books, and Vogue to name a few, Elizabeth’s writings and behavior had to be scoped for a feminist angle. Hardwick (b. 1913; d. 2007) was from Kentucky. A Southerner, she dressed elegantly and “held her hands a certain way.” A feminist with fine breadth and depth of opinion, but not at all radical as evidenced by her chosen topics of cultural interest.

Hardwick was married to the American poet Robert Lowell. The biggest challenge in her personal life was understanding and remaining devoted to this mentally ill man. When in a manic state, Cal as she called him, would take up and live with a younger women for periods of time. We read of Hardwick’s struggles to formulate a response–to remain emotionally stable, the love to give and what to hold back. It seems her acceptance of the illness explanation provides some relief, but his condition is chronic and the philandering returns every couple years. She plods on and produces work through the emotional challenges.

This story is heavily researched in archived collections at libraries. The great writers wrote letters to their friends, family, and literary peers. The casual letter content is as enjoyable to read as are the novels and essays. Author Curtis has pulled together a first biography of a likable person and gifted writer–Elizabeth Hardwick. Quite interesting was her review style of being a keen cultural observer and oftentimes dry cutter of the writer under review, who frequently was a friend, and the characters constructed by that writer in his/her novel.

Elizabeth wrote interesting criticism of the locales she resided in when communicating with friends or in her books and stories. Author Curtis gives her take on Hardwick’s unreserved description of the people of Iowa City and Lexington, Kentucky, and in her long-term home towns of New York City and Castine, Maine. In Europe with the in-demand poet Lowell for two-plus years qualifies her to label Amsterdam dark and Rome vibrant. Florence, Paris, Switzerland, and Munich provide interesting material. Travelers wrote letters and the homebound wrote to their travelling friends.

Curtis writes that in her letter content, Elizabeth often complains about having to do housework, finance-keeping, suitcase and storage packing while living alone and when her husband Cal (Robert Lowell) was in another city or country doing what he does. Although finances were often an issue, she thought it necessary to splurge (in my opinion) for domestic help. I first met Hardwick by reading the 2019 book, The Dolphin Letters (edited by Saskia Hamilton), where the personal letters of Hardwick, Lowell, Elizabeth Bishop, Mary McCarthy and others convinced me of her likable personality. In that book, warm (but selected), highly concerned letters to her manic husband were sent regularly while he was pursuing younger women. I was swayed.

This biography has forty-one pages of small print footnotes plus a section titled “Works By Elizabeth Hardwick” with the following subtitles: Books; Essays, Reviews, and Op-Eds; Short Stories and Film Script; Editing, Forewords, and Introductions; and Interviews, Symposia, and Lectures. Add to that a long list of secondary sources referenced by Curtis.