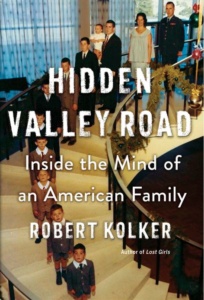 This book tells the remarkable story of a beautiful family and a devastating illness. The mental disorder struck six sons and had them committed frequently to state hospitals for a minimum three month terms, stabilized with psychotropic drug treatments with major side effects. The two girls, the youngest of twelve children, survived lives of fear, neglect, and escape; and they brought this story to light with the book author as messenger.

The unanswered questions are numerous. The father was a military officer with both experience as a wartime navy commander and professor and falconry expert at the Air Force Academy. But Don was often absent from the household, suspected of philandering, prone to referring to his kids by number not name. The mother Mimi upon marriage converted to Catholicism seriously learned her spiritual obligations, and imparted that devotion to her twelve children who came along in regular succession. She was committed to a life in the world of arts in addition to her family responsibilities. Was there too much regimentation? Expectations too high? Overly strict parenting? Based upon my reading, I would rate them as good parents.

The family house was on a cul-de-sac at the base of the foothills in Colorado Springs. There was often chaos. For the boys there were four sets of bunk beds in a lower room. There was arguing and physical fighting that would require medical attention. The girls were the youngest, the eleventh and twelfth children, and obviously very vulnerable; they endured much abuse and this is very much their story of lifelong struggle and continuous perplexity. Why me? Why us? They are the author’s star interview subjects.

Some will criticize the mother for being overly strict in her upbringing practices. But, Mimi stayed committed to helping her sick children and providing a home for them when they struggled as adults to be independent. The youngest, daughters Margaret and Lindsey, expressed bitterness for not having received parental attention while all Mimi could give was directed to her sick sons. Nonetheless, author Kolker points to the parent’s (and societal) failure to dismiss the common shame of mental illness and to attack the problem as a family (and as a society).

The history of schizophrenia begins as dementia praecox in the late nineteenth century to its present state as a little-understood array of categorical symptoms and underlying competing theories of causation and treatment. It arises from a vague perceptual distortion from reality; behaviors include delusions, hallucinations, agitation, physical violence, and sexual abuse. In this story, featuring Kolker’s thorough description of the lives of each of fourteen family members, all of the medical theories and symptoms are represented and addressed through the brave interview testimonies of mother and daughters. Along with the family struggles, Kolker writes of the lives and work of key scientific researchers looking into the biological and possible environmental explanations of the disease.