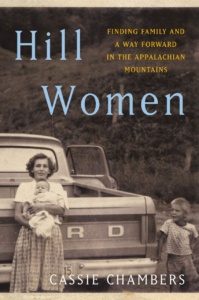 With this book Cassie Chambers is honoring her Granny, Aunt Ruth, and mother Wilma who each encouraged and supported her quest for college experience and success away from the farm. Grandfather Papaw was first to address his daughter Wilma about the need to stay at home and work on the farm as her brothers were doing. Years later, Wilma was a graduate of Berea College, a successful business person, and the wife of a research academic. Cassie never wavered from the college objective, so do not be trapped into thinking she overcame great resistance and was the first person in the family, etc.

The women working the Cow Creek holler in Owsley County in Eastern Kentucky is the top subject of this book. They lived at the base of the Appalachia Mountains in an old house without plumbing or a bathroom, and heated with a wood stove. They were sharecroppers. The farm effort was growing tobacco and raising a few animals. This story goes back to grandfather Papaw and Granny. They have seven children who all work on the farm. The boys chose to remain on the farm or the immediate region after they drop out of school. For them, life is working on the farm. There are two girls who are big here–the author’s mother Wilma and Aunt Ruth. Wilma, the younger, breaks away from the farm tradition and goes to nearby Barea College. Aunt Ruth is considered one of the best tobacco toppers and hardest workers in Owsley County–she does not go anywhere.

Cassie’s childhood was relatively comfortable compared to that of her grandmother, mother, aunts and uncles. The relatives grew up on the farm in Owsley County, the second poorest county in Kentucky. A generation later, Cassie was born in Barea, a college town sixty miles from the farm. The farm was for sharecropping, and not owned by the family; the operation was on a lease. Because Wilma and Cassie’s father were students, they rented a cheap place in Barea; but Cassie spent several days a week in the care of Granny on the farm. She was too young to do chores and grow tobacco, and got to run with the dogs and commune with the farm animals. Back in Barea, she was cared for by her college student mother who took her on campus, to the child development center, and ultimately to Wilma’s graduation where she celebrated with her on-campus friends. Granny and Aunt Ruth, although committed farm workers and early school dropouts, supported both Wilma and Cassie all the way. The stories of toiling on the farm during difficult economic times and caring for the family were passed to Cassie by the family women.

After ten years of suffering from Alzheimer’s, Papaw passed away and there was change. Granny and Aunt Ruth tried to work the farm as before, but had to give up the lease when unable to hire farm help. They were able to put an old trailer on property owned by Uncle Dale on the other side of Booneville, the local town. But, a remarkable thing happened–Aunt Ruth, the 44-year old life-long outstanding tobacco topper and farm worker, married a local man. With this event written, Cassie reflects on the 1940 marriage of then 13-year old Granny and 32-year old Papaw. She is not able to reconcile it, but takes solace in their devoted parental life and commitment. In today’s world of choice, reasoning, and informed decision-making it is a wonder that childhood marriages did last. It all turns on societal norms and personal commitments.

Before the economic changes and onset of drugs complicated matters, the simple “hillbilly” culture existed. Cassie quotes her Uncle Dale who remarked, “I may be a hillbilly, but I am smart enough to know it.” Moonshining (a nighttime operation), thought to exist to this day, was a stereotypical feature of the hill culture during Prohibition and the Depression. The small coal-mining and farm communities are remotely located from good schools, colleges, and jobs. The culture could not change if the inhabitants stayed at home after high school and if those who left for college did not come back. Disadvantage was perpetuated.

The second subject here is Cassie’s college life. A prevailing issue is how to conquer the social differences. At United World College, a two-year college preparatory experience, the students are from all over the world. They are from different cultures and English is their second language. But is this not a benefit? The students do not look down upon an unknown hillbilly culture, and all classes are taught in English. The graduates are assured scholarships. Upon completing the two-year curriculum, Cassie chooses Wellesley College, which becomes for her a stepping stone to matriculate at Yale College. The issues here are that of a rural girl interacting with people from families of money and power, and the exercise of sense of superiority by men of Yale, once an all-male Ivy League college. Cassie is from the rural country and a few social errors are described, but she is hard-working, a hill country trait, and has great support from her women at home. She gets great grades and graduates from Harvard Law.

She faced the following dilemma throughout adulthood–do I transform myself into a person of privilege or am I truly a hill person who needs to get back to my family? At Yale she attained a perfect GPA, but it was the social awkwardness of trying to fit in with a mostly wealthy student body that was more challenging. She also has much to say about the young male student disrespect for female students and makes reference to Brett Kavanaugh and Me Too Movement. Cassie obviously did not let this impede her academic work.

In this book Cassie speaks of the economic decline due to changing tobacco and coal demand and the hardening of life that followed. The people are hard-working but need assistance programs. Cassie has returned to the region as a funded pro bono lawyer to work with abused women who are unable to afford legal fees. The Cow Creek family “hard working” tradition is winning her favor and this emotional pull is prevailing over the siren song of the greater world of money and power.

Now, a few years later she appears to be trying state and local politics. The book describes her decision to apply to become the vice-chair of the Kentucky Democratic Party. After completion of the book, she campaigned successfully for a city council seat in Louisville. I am reminded of a young Barack Obama who as a new lawyer doing grassroots organizing in Chicago wrote a memoir paying tribute to the roles his mother and grandmother played in his life decision-making. This memoir may serve as a political stepping stone for Cassie Chambers Armstrong of Kentucky.