Bridging Arabic And Western Music With An Unusual Instrument 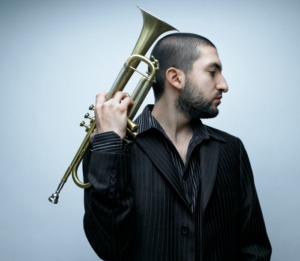 Ibrahim Maalouf plays a four-valve trumpet — most just have three. The extra valve, attached to the button a trumpeter pushes down, allows the Lebanese musician to play quarter-tones — the notes between notes that characterize Arabic “makams.”

“The makams are scales and modes with quarter-tones and three quarter-tones intervals,” Maalouf says. “This is something that you cannot find in Occidental music.”

“This trumpet that he invented is really pure genius. He invented the only Arabic instrument in which you blow, that allows you to play all modes, all scales, in all the tonalities,” Maalouf says. “This does not exist in Arabic music. It’s not only a trumpet that makes you play quarter-tones. He invented a way to blow in the instrument. He invented a new way to play the trumpet.”

Maalouf says there are many links between Arabic and Western music. He says when he’s playing jazz, he can incorporate Arabic scales thanks to one specific similarity.

Ibrahim Maalouf’s latest project is his first devoted exclusively to jazz: a score he was commissioned to write for the 1926 silent film by French master René Clair, The Prey of the Wind. Maalouf’s inspiration was another trumpeter’s score for another French film: Miles Davis‘ music for the Louis Malle film Elevator to the Gallows.