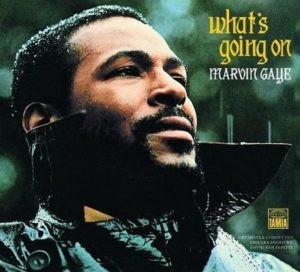 On Friday, May 21, 10 pm, The Funky Boombox celebrates the 50th anniversary of Marvin Gaye’s quintessential soul album, What’s Going On, with music from the album and all-star tribute versions of its classic songs.

The album marked a departure for both Gaye and the Motown label, who historically had kept their distance from social justice issues. Motown studio chief, Barry Gordy, was rumored to have hated the title track and refused to release the song as a single.

100,000 copies of the single were released without Gordy’s knowledge with the help of Motown sales executive Barney Ales. Upon its release, the song became a hit and was Motown’s fastest-selling single at the time.

Hear the songs and the stories from an album BBC Music’s David Katz described as “one of the greatest albums of all time, and nothing short of a masterpiece”.

The Funky Boombox is hosted by Rob Seligmann and heard on Friday nights from 10:00 pm to midnight.