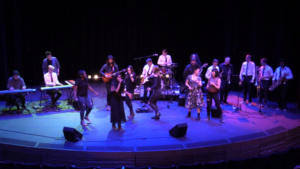 KUVO’s High School/Collegiate Series welcomes “Quincy Avenue Rhythm Band to the Phyllis A. Greer Studio on Tuesday, October 8 from 7 to 8pm. When a group of young musicians share their love of music, the legends come back to life. Ranging from Dr. John to Earth Wind and Fire, Otis Redding to Sly and the Family Stone, the Quincy Avenue Rhythm Band plays the classics with enthusiasm and attitude. Along with passion, these Kent Denver students also have the credentials of a serious group of musicians. Not only have individual members received recognition on both the state and national levels, but the band was named the Best High School Blues/Pop/Rock Group in the country by Downbeat Magazine, the “bible” of soul and jazz, in 2006, 2009, 2010, 2012, 2014, 2015, 2016, and again in 2017!

From the Loyola Jazz Festival to the BB King’s Blues Club on world famous Beale St., Quincy Ave. knows how to make a crowd groove, how to have a good time, and how to leave the audience wondering how a group of kids can sound that good! As long as Quincy Ave. continues to make people tap their toes and bob their heads to the grooves of James Brown and Michael Jackson, the band will base its success on one thing: the music.