Houston Person: “Rain or Shine” | December CD of the Month 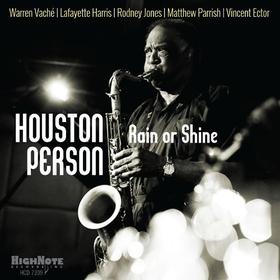 Houston Person is in his mid-80s, despite recording nearly 80 albums as a leader, he is still playing at a mercurial level of excellence. He is one of the last standing saxophonists that serve as a link between the pioneers and vintage players that were Coleman Hawkins, Ben Webster, Lester Young et al and the contemporary players from the John Coltrane school.  Mr. Person brings his signature big, fat tenor sound to his latest project, Rain or Shine for the HighNote label, his home since its inception in the early 1990s. He has recorded over 25 sessions as a leader and co-leader with the late Etta Jones as well as producing another dozen or so other CDs for the label. Known for his knowledge of a vast amount of songs, standards and obscurities, Houston’s soulful and swingin’ sax shines brightly on his newest outing featuring 9 solid selections covering ballads and bluesy jazz standards and originals.  This time out Person recruited some new accompanists for his project: Warren Vaché-cornet, Lafayette Harris-piano, Matthew Parrish-bass, Vincent Ector-drums and Rodney Jones on guitar.

A native of Florence, South Carolina, Houston began his music life as a piano player before moving over to the sax. He is not only a graduate of South Carolina State College, he is also an inductee to their Hall of Fame. Throughout the 1950s as a member of the US Air Force Band, he played numerous USO concerts with many outstanding jazz musicians that led him to settle in New York in the early 1960s after his tour of duty concluded. He began recording as a leader in the late 1960s and also began a decades long collaboration with vocalist Etta Jones which lasted to her passing in 2001. In 1982, Houston received the prestigious Eubie Blake Jazz Award for his superb work as a soul jazz artist. Some of the stand out tracks on his most recent CD are the title track, Come Rain or Shine,  Learnin’ the Blues, the obscure ditty from Onaje Allan Gumbs- 132nd and Madison,  and his guitarist Rodney Jones’ Soupbone. After you listen to this new offering by Houston Person from start to finish, I am confident you will agree with me and a growing number of jazz followers that Mr. Person deserves to enter the NEA Jazz Masters Hall of Fame in 2018. 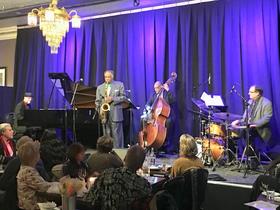