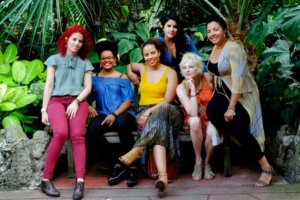 The live music climate in the Mile High City is for real, if the Denver debut of Jane Bunnett and Maqueque’s U.S. tour is any indicator.  With three records, a Juno award and several Grammy nominations, Jane Bunnett’s brainchild has blossomed into a full-grown powerhouse jazz combo. Bunnett’s talent and soul can kick down doors, and the young Cuban women she mentors are able to stride onto the jazz scene “on firm ground.” (Pun intended – the title of Jane Bunnett and Maqueque’s most recent album is “Terra Firma.”) KUVO’s music director Arturo Gomez reached Bunnett at her Toronto home via Zoom to catch up with the remarkable story of Maqueque and the upcoming tour, which debuts at Dazzle at Baur’s for one show only on Sunday, October 17.

Reedwoman Bunnett had been traveling to Cuba for years before she began cultivating some outstanding talent more than a decade ago. It was an overdue concept in a land with so much musical heritage.

Live at the Vineyards — Let's Get Ready to Dance and Party!