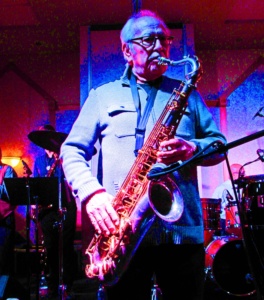 Freddy Rodriguez Sr. was inducted into the Su Teatro’s Chicano Music Hall of Fame in 2010. Rodriguez was a regular performer on the city’s most respected jazz stages, starting during the golden era of the Five Points neighborhood at the Rossonian Hotel, and including Denver’s oldest jazz haunt, El Chapultepec where he was a regular for over 40 years.

“Being a Mexican-American and Chicano, his musical background and interests went not just to jazz but all the music he was around,” said KUVO’s General Manager Carlos Lando.  “If the music moved you, Freddy would lock in the groove and just go from there. He did not have any pretensions about whether something is or isn’t jazz.”

The world lost Freddy to covid-19 earlier this year on March 25, he was 89 years old.

Miles Davis was there for, “ The Birth of the Cool”,
but Freddy Rodriguez was borne cool.
Freddy was an imported Westsider,
coming from the San Luis Valley,
he married his Westside Homegirl,
but he fell in love when he picked up his horn.
They got married in St. Cajetan’s Catholic Church,
but Freddy found religion when he heard Coleman Hawkins

Freddy Rodriguez played in places our mother’s warned us about.
We sat in the audience with our eyes half open,
squinting from the smoke,
and the lack of light,
but lost completely in the beautiful magic blowing from the reed of this brown brother. He stood immersed among the brothers,
and we in cool jazz fantasy dreamed.
We smoked enough to dig the high that Freddy gave us.

Freddy did LA and NYC, but Denver needed him,
jazz needed him,
Latin jazz awaited him.
He was an icon in the making,
and Chicanos needed an icon.
We needed a Chicano Jazzman.

Trane was beatified and made a saint, it’s true, St. John Coltrane,
Freddy, though is always a warrior,
inch by inch,
gig by gig,
set by set,
he carried the jazz message,
to club and corner,
a vato with an axe to blow.

Scales or chords or modes,
Freddy did it all,
Monk and Bird, Lester Young, Dizzy
Big Band, little band, combo, quartet
orquestra
No le hace ese,
El Freddy does it all.

His name is synonymous with Colorado jazz,
All these years while you were playing,
Creating,
Teaching
we were listening, learning and growing

So Trane is a Saint, Freddy’s a warrior,
Hawk brought it on with his Body and Soul
Freddy gave con todo el alma
Miles, he was there for the Birth of the Cool,
but for the record Freddy Rodriguez
“The Chicano Jazzman”
was borne cool. 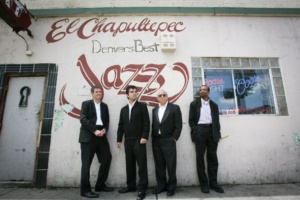 Live at the Vineyards — Let's Get Ready to Dance and Party!