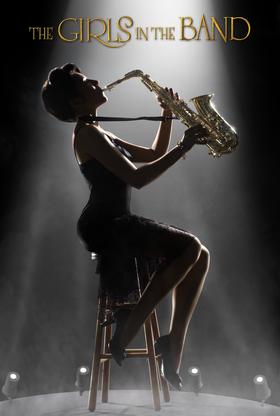 For much of the history of jazz, this has largely been the deal. If you’re a cute woman who can sing, there’s a place for you on the bandstand. If you can play the piano, maybe there is room for you as well. But leave the real instruments, the soloing and all the rest to the men. For all the freedom and liberation that has been intimately associated with the history of Jazz, the struggles of women to find and secure their rightful places in the music has been an ongoing untold story. Eight years in the making, Judy Chaikin’s documentary The Girls In the Band sets that story straight.

Completed in 2011 but not widely released until 2015, the film fills in the much-needed history of women in jazz from the earliest days of Lil Hardin Armstrong (who started with King Oliver and she, not Louis Armstrong, first led the original Hot Five) all the way to the present with young phenoms like Anat Cohen. The film centers on the still-living women such as Peggy Gilbert (101) and Roz Cron (84) who were part of the all-girls bands in the 1930s and 40s. They provided an oral history of what it was like trying to make a living in a man’s world.

The film begins and ends with the iconic photograph “A Great Day In Harlem” as a touchstone for jazz greats and with speculation of why, with the exception of Mary Lou Williams and Marion McPartland were women so under-represented in the jazz world. [Note: shame on the director and Billy Taylor for ignoring the presence of Maxine Sullivan in that photo]. The documentary takes us through the decades of jazz, interwoven with the social and political histories of the times. Special attention is paid to the stories and significance of the all-girls band The International Sweethearts of Rhythm. Originally founded in the Mississippi Piney Hills School for orphan girls that grew to international proportions with a band of excellent players of mixed races, ethnicities and sexual orientations beginning in the late 30s who stayed together for 15 years, including a 5-month USO tour of Germany in the late stages of WWII.  Director Judy Chaikin should be commended for tracking down the still-living members of the Sweethearts, in their 80s and 90s to tell their story. We learn about other all-women bands that found work during the war years and meet individuals such as trumpeters Billie Rogers, who earned a spot in Woody Herman’s band, and Clora Bryant who jammed with Charlie Parker. Chaikin’s research team and her film editor should also be lauded for their incredible discoveries of archival publicity stills, photos and film clips of women musicians, woven together with prevailing cultural portraits that capture the variations of sexism, chauvinism, and Jim Crow laws these women endured.

Several greats are given specific attention, notably pianist, composer, arranger and bandleader Mary Lou Williams and trombonist/arranger Melba Liston. The point is made that while both women were respected by their peers, neither was honored as they should have been. In part because of the struggles they went through as women, both retreated completely from the jazz scene for years – Mary Lou turning to Roman Catholicism and Melba moving to Jamaica to teach music. Both re-emerged in the late 1970s. In 1978 a pair of local women, Carol Comer and Diane Gregg, created the first Women’s Jazz Festival in Kansas City. Comer and Gregg were responsible for bringing Melba Liston out of retirement to headline that first festival. In addition to Melba and Mary Lou on that first bill were Carla Bley, Toshiko Akioshi, and Flora Purim, Betty Carter and Marion McPartland. It also reunited the International Sweethearts who shared the stage with another all-women’s band Maiden Voyage.

The film skips the 1960s and leaps ahead into the 1970s juxtaposing interviews with people like Jane Ira Bloom and Patrice Rushen with archival footage associated with the rise of the women’s movement. While these and other women approached their craft with considerable confidence and belief in increasing opportunities, other women testified to the continued presence of chauvinism and sexism on and off the bandstand. For every Terri Lyne Carrington, whose talent and support system insulated her from such struggles, there were others like Diva drummer and bandleader Sherri Marcile who described being thought of as less than male counterparts solely on the basis of gender.

The film strikes a hopeful tone, with others such as pianist Geri Allen, trumpeter Ingrid Jensen, and bassists Nedra Walker and Esperanza Spaulding articulating their thanks to the women who came before them and made it possible for them not having to endure the same slights and obstacles in their pursuit of their art. They exude a confidence that the older generations admire. Ninety-six year old Billie Rogers says at one point that for her the pinnacle was not having a featured solo role but rather a chair in the horn section, thereby being accepted as just another good musician. Patrice Rushen acknowledged that things are still not entirely on equal footing. “You want to be good anyway, but if you’re the girl in the band you have to be.”  The film ends as it begins, this time with a gathering of women players to recreate the A Great Day In Harlem photo shoot, at the same brownstone, in the same pose. According the Judy Chaikin and her producer, it was simply a happy coincidence that the day they chose to do it was exactly 50 years to the day of the original photograph.

The film has made the rounds to film festivals and is now available to rent from Nexflix and YouTube, and it’s for sale on Amazon. Judy Chaikin’s Girls In the Band website (www.TheGirlsInTheBand.com) sells collector’s editions that include short films on Mary Lou Williams, on the road with the DIVA orchestra and the story of one transgendered musician. For fans of music and history, this is definitely one to see.

(Note: Music on this feature included “Vi Vigor” by the International Sweethearts of Rhythm and “Mary’s Idea” conducted by Mary Lou Williams and performed by Andy Kirk’s Clouds of Joy.)