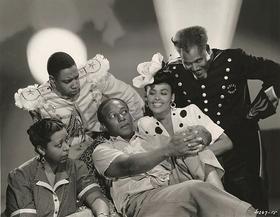 Commentary by Steve Chavis and George Peck, clips from film, song “Going Up”

There’s no reference to Christmas or Santa, but “Cabin in the Sky” is full of heavenly imagery and the spiritual struggles within a man.  In the seasonal tug between materialism and morality, I find it the perfect holiday film.

Little Joe Jackson has money problems, gambling with some dangerous gangsters… and he has woman problems too.  But after taking a bullet at a nightclub, Joe has some business to do with the Almighty.  As he lays at the brink of death, which way will he go – the redemptive path of righteousness and salvation, or the drinking and womanizing of his past?

“Cabin in the Sky” (1943) is arguably the most successful film with an all-black cast in the golden age of Hollywood.  Its Faustian plot was more substantial than the musical revue “Stormy Weather,” released a few months later with its own cavalcade of stars.  Eddie Anderson, famous as Jack Benny’s sidekick “Rochester,” plays Little Joe.  Ethel Waters plays the faithful, praying wife Petunia who hopes Joe will turn over a new leaf.  Joe’s tussle with temptation is made that much harder when he finds himself enticed by the lovely Georgia Brown, played by a 26-year old Lena Horne.

Lynn Root wrote the book and libretto, and shared it with choreographer George Balanchine, who was excited to have it as his first directing assignment.  Vernon Duke was brought in to write the music, and Stanley Green’s book on musical comedy points out that Ira Gershwin and E.Y. Harburg (“Over the Rainbow”) turned down writing the lyrics before John LaTouche got the gig.

The Broadway version of “Cabin in the Sky“ opened in 1940 with Ethel Waters as Petunia, and Rex Ingram as Lucifer Junior.  Dooley Wilson – the pianist from “Casablanca,” played Little Joe on stage.  The vixen Georgia Brown was played by choreographer Katharine Dunham, who also shared her dancers and choreography with Balanchine’s stage production.  Audiences kept coming for 20 weeks, a strong enough performance to get MGM’s attention.

“Cabin in the Sky” was Vicente Minelli’s first to direct.  And it was Lena Horne’s first and only leading role in an MGM musical.  It was the studio’s first all-black picture, but pound for pound, star for star, this project was a huge opportunity for many involved, and it was profitable.

As if to prepare the wider and whiter movie going public for an all-black cast, the film begins with an opening scroll: “The folklore of America has origins in all lands, all races, all colors.  This story of faith and devotion springs from that source and seeks to capture those values.”

Scholarly reviews are mixed.  One writer said the Broadway production showed “tasteful restraint,” and avoided turning it into a minstrel show.  But actress Jean Muir complained about Negro caricatures.  When it came time to produce the film, Minelli reportedly sought input from black leaders before the filming began.  The DVD’s updated commentary track admits prejudices of the period that were in the film.

In the film you might recognize a few of the African-American actors of the day, Mantan Moreland and the squeaky voiced Butterfly McQueen.  And Busby Berkeley directed a fabulous dance sequence by the villain of the picture, Domino Johnson.  “Shine” was sung and expertly danced by “Bubbles” John W. Sublett.

Ethel Waters was a major star in the 1920s and 30s, across blues, jazz, gospel and pop genres, and should be top-of-mind when it comes to mid-century American singers.  Her romantic ode “Happiness is a Thing Called Joe” was Academy-nominated for Best Original Song (along with Cole Porter’s “You’d Be So Nice To Come Home To.” Neither won.).  Strange but true: Ethel Waters star on the Hollywood Walk of Fame is approved, but not yet funded.  (www.ethelwatersstar.com)

The club scene with Duke Ellington and his Band was joyous – a boogie-woogie, high-stepping, jitterbugging romp.  There are just four short Ellington numbers on the original film soundtrack, and a Louis Armstrong number “Aint’ It The Truth,” plus other outtakes.  Considering the wealth of performances by Ethel Waters, Eddie Anderson and Lena Horne, and the 98 minutes of music, it’s worthwhile for the collector.  The Broadway cast recording is also available on CD.