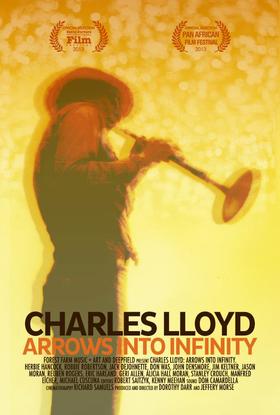 he best music causes molecular changes in the atmosphere around the players and their audience. Once you hear the music you are never the same. We go out somewhere and we don’t come back the same.”  — Charles Lloyd

At age 77 Charles Lloyd will join the latest NEA Jazz Masters in a ceremony to take place April 20th in New York City. He is also completing being the Artist-in-Residence at the San Francisco Jazz Center. In this very special film he asks, “what does being a Master mean? Is he the bow or the arrow or is he residing in the space between being pulled back and in flight?” Charles Lloyd is a master because he has fused the wisdom of his early influences (e.g. Lester Young) with his quest for modernity. He is ancient and now, tender and strong, grounded in tradition and free of boundaries, thrilling and contemplative, and always, always searching.

I have a confession. I am a Forest Flower Child. In 1969 the Charles Lloyd Quartet played at a rock club (the Kinetic Playground) in my hometown Chicago. He was sandwiched between British blues-rock band Savoy Brown and Johnny Winter. It was the classic band with Ron McLure on bass, Jack DeJohnette on drums and Keith Jarrett on piano. Charles was 31 and his band was in their early 20s. I was 15 and star struck. The combination of his post-Coltrane sheets of sound mixed with Indian drone, Middle-Eastern scales, swinging blues, funky vamps, and deep pensive ballads bored into my teenage consciousness. I have loved his music in all its shapes ever since. Recorded in 1966, Forest Flower became one of the first million-seller albums in jazz history.

Directed by his wife, the visual artist Dorothy Darr and Jeffery Morse, “Arrows Into Infinity” (2012) offers a deep portrait of a musician and a man who, as Herbie Hancock says, has never sounded like anyone else.  It takes us from his early beginning in Memphis where he went to high school with his dear friend and mentor Booker Little and cut his teeth playing behind blues giants like Howlin’ Wolf, up to his work with his New Quartet of Jason Moran, Rueben Rogers and Eric Harland.  Along the way we see archival footage of him performing in Chico Hamilton and Cannonball Adderley’s bands before forming that first astonishing quartet. Original bassist Cecil McBee, was later replaced by McClure.  They were an instant sensation wherever they played from the Monterey Jazz festival, to the Fillmore, to the Soviet Union. We learn about his relationships with the late great French pianist Michel Petrucciani, actor Burgess Meredith, and his lifelong friendship with drummer Billy Higgins. Talking heads from the jazz and rock worlds offer reverential portraits. Shots of the Pacific Ocean and the California coast, Lloyd and Barr’s home and elsewhere are interspersed throughout. Nature, with its solitude and stillness, is an essential aspect of his being. The music is plentiful, soulful, and marvelously diverse.

The film also offers a rich study of Charles Lloyd as a compassionate seeker trying to make sense of the world and his place in it. He is something of an enigmatic figure and an individual who consciously chose his own path. In his high school yearbook, where typically people signify things like ‘most likely to succeed,’ the caption next to his photo read: “All that is in tune with thee, O Universe, is in tune with me.” As early as a teenager, it seemed he had a sense of who he was and that a spiritual path lay in front of him.

At the height of his popularity in the early 1970s, he disappeared from the music scene for almost 10 years. He did it to break free from the chains of fame and commercialization, of substance abuse and their effect on what he calls his ‘spiritual compass.’ He retreated into Big Sur, California and dissolved himself into that natural environment. There he meditated, became a practitioner of Vedanta (a branch of Hinduism), and grew deeper from within. However, he never stopped playing. It took Michel Petrucciani coming to find him to bring him out of his exile and to reconnect with the larger musical world.

The film offers so many fantastic stories of his interactions with musicians, artists, and actors. Current drummer Eric Harland is almost speechless when he tries to describe the trust he felt to perform between Charles and Zakir Hussain, and the incredible standard they set for him to find his own voice in the music. Jason Moran echoes that sentiment about the nightly demands of being on the bandstand with Mr. Lloyd and to commit to not only be in the moment but to make each moment transcendent. That is the power Charles Lloyd has been bringing to his music for over 50 years.

Anyone who has ignored or dismissed Charles Lloyd over the years as being some sort of Coltrane-lite sax player who noodles across an uninspired ECM records catalogue has not been paying attention. He has always worked with the finest musicians of the day, not only in jazz but also in Western and International classical music. He performs and records beautiful standards and great chestnuts, as well as his own complex and yet deeply accessible compositions. The man is lyrical, he is a romantic, and he can flat out blow! This is an unusual musical documentary because it spends as much time revealing the personal and spiritual journey of the artist as it does the music he produced. Anyone who wishes to feel touched by his artistry will find a warm spot in his or her heart for this true and deserving jazz master after watching “Arrows Into Infinity.”