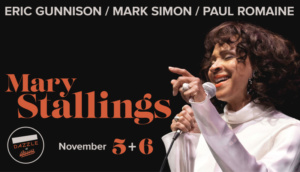 Vocalist Mary Stallings comes to Dazzle at Baur’s on November 5 and November 6, performing selections from her latest critically-acclaimed release Songs Were Made to Sing. KUVO is fortunate to carry her Wednesday, November 6, 2019 performance on the air and via its global stream at www.KUVO.org. The broadcast begins at 7:00 p.m.

Miss Stallings has put together a “First Team” of local accompanists: Eric Gunnison at piano, Mark Simon on bass and Paul Romaine on drums. Stallings, who has been singing professionally since before she was 10, brings a maturity to her selections.  In her voice you will hear a lifetime of emotional intelligence that enables her to truly inhabit a lyric.

Her musical life includes work with such luminaries as Ben Webster, Cal Tjader, Earl Hines, Red Mitchell, Teddy Edwards, and the Montgomery brothers in Bay Area night clubs. She’s toured the world, and spent a year in the late 1960s performing in Nevada with Billy Eckstine. In 1965 and 1966, she toured South America with Dizzy Gillespie’s band. From 1969-1972, she enjoyed a successful three-year residency in the Count Basie Orchestra.

Mary Stallings’ 12 albums to her name are truly highlighted by her most recent release on Smoke Sessions Records, “Songs Were Made to Sing” (2019), which was selected as KUVO’s May 2019 CD of the Month.