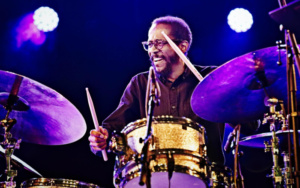 Brian Blade and his ensemble Life Cycles are visiting Dazzle at Baur’s on Monday and Tuesday, September 23 and 24. KUVO is proud to carry their first set LIVE this Monday evening, September 23 at 6:30pm. Join KUVO hosts Rodney Franks & Andy O’ at Dazzle or tune in to the live broadcast.

Brian Blade’s Life Cycles presents an all-star ensemble of musicians performing bold and colorful music in anticipation of their new CD release, as well as the timeless music of the great Bobby Hutcherson. The vibraphone work on this tour is handled by Monte Croft.

Life Cycles (Volume 1) is a band that was formed by three members of The Fellowship Band in 2001, comprised of six musicians living in the New York City metropolitan area at the time and performing under the name Subterranean Sextet. Back in 2001, the sextet mostly played in underground night clubs around Manhattan, but there were various festival appearances throughout the country.

All the members of the band had composed music specifically for the ensemble, but unfortunately, they never recorded together. Fast forward to the present day – the band has decided to reestablish itself and expand to include percussionist Rogerio Boccato, as well as finally record their original compositions and the music of one of their heroes: the great vibraphonist, Bobby Hutcherson.