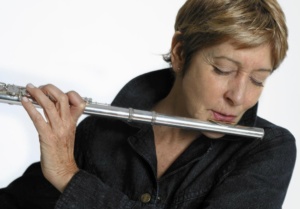 KUVO’s performance archives go way back, even before we were in Five Points. In September of 1994, Lew Tabackin played his tenor sax and his flute with Eric Gunnison, Ken Walker, and Nat Yarbrough. 2004 was a Very Good Year for Gabriel Mark Hasselbach, who played the unusual combination of trumpet, flugelhorn, and flute at KUVO. And flutist Dave Valentin visited KUVO for an unforgettable session with Hilton Ruiz in 2004. We’ll also get to 2005 when Vince Wiggins played flute with pianist Joe Bonner. Greg Abate and Ali Ryerson played at KUVO in 2005. Bob Rebholtz brought his saxophones and flute to KUVO in 2007 as part of the Manny Lopez Latin Jazz Project.

The flute is small, but it packs a big punch in the hands of these players in KUVO’s Phyllis A. Greer Performance Studio. That’s Saturday evening, April 25, at 10 pm with host Susan Gatschet.  “On Stage,” a KUVO exclusive!

Images:
Dave Valentin on homepage
Ali Ryerson on this page