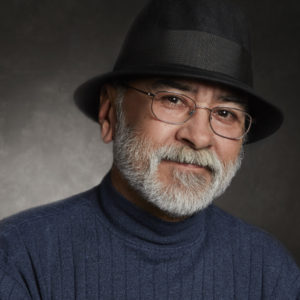 It’s his nom de plume, his alias, his stage name, his no-longer-secret identity that keeps the music out front on KUVO’s long-running show “La Raza Rocks.” In just one hour every Sunday at 1 pm, “Pocho Joe” manages to entertain, educate and intrigue with his stories behind the songs that made Chicano rock, pop, and soul famous.

“The music should stand on its own – the artists, the history, the culture,” says Pocho Joe. “It’s never been about me as a personality. That’s a hard concept for a lot of people to understand.”

Pocho Joe’s secret identity got blown in 2018 when Darold Vigil was inducted into the Chicano Music Hall of Fame, located at Su Teatro. 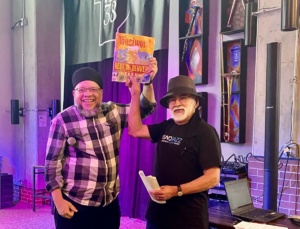 Earlier this year Westword magazine named Vigil “Denver’s Best Radio Host.” (Vigil is) “a walking encyclopedia of Latin rock, soul and R&B. And he graciously shares his immense knowledge of those musical styles and their purveyors past and present, taking La Raza listeners on a guided tour, from Denver’s Brass Monkey to Cali’s Champs and beyond.”

La Raza Rocks started in 2002 with two hosts, “Gonz” and a high school student Gabe White, who was just 16 and in high school at the time.  Pocho Joe replaced Gonz, and White left the show in 2011. Pocho Joe has been keeping the flame burning solo since then.

The host embraces the term “pocho,” although it’s sometimes used derogatorily. “Think of a poached egg, not raw, not fully cooked. Chicanos are not fully Mexican, and not fully American. Our culture, our identity, our food, our Spanish – we’re a cultural bi-product or two cultures, two nations. And over 500 years, we have developed a culture that represents something distinct.”

Vigil has other secret creative identities and artistically heroic deeds. He’s not telling. It’s enough to let the music get all the glory.

Rita Moreno: Just a Girl Who Decided to Go For It

A Night Around the World