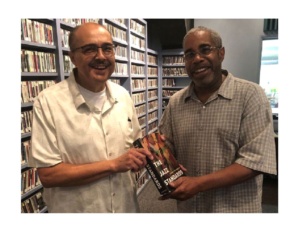 Recorded jazz is 100 years old, and the Great American Songbook is just a bit older, but leave it to the jazz musician to keep the music of the generations FRESH! The vast and diverse storehouse of American musical literature, in the hands of these players, comes alive with every performance! Our radio tribute to these sonic tales is called “Stories of Standards,” airing weekdays on KUVO Jazz since 2012!

“These songs are time-tested,” said Rodney Franks, host of the feature airing Mondays through Fridays at 7:50 am and 8:50 am. “I never cease to be entertained by the creativity these artists bring to the songs we thought we already knew. It’s no wonder ‘Stories of Standards’ is an audience favorite.”

Longtime KUVO programmer Carlos Lando established the feature in 2012 as a way to present the music behind Ted Gioia’s tome The Jazz Standards: A Guide to the Repertoire. The radio feature showcased jazz versions of Broadway musical numbers and international folk tunes, as well as bonafide jazz classics like “Ain’t Misbehavin’,” “It Don’t Mean a Thing,” “So What” and this week’s standard, Horace Silver’s “Song For My Father.”

Since then, Franks has deepened the canon by exploring more modern and pop fare, as interpreted by numerous artists, including Motown hits like “Never Can Say Goodbye” and modern cinematic tunes like “Pure Imagination.”

Like everything you experience at KUVO, Stories of Standards is a team effort, led by Rodney Franks who writes the features. Behind the scenes, Arturo helps find versions of the song to choose from (we can only play ten or so versions per week). Volunteer Linda Hillshafer writes the web article, Arvida Rascón builds the web page including images and videos, and Susan Gatschet records and produces the audio segments with Rodney Franks. It’s a jazzy village!

The songs we know. The songs we love. And some surprises along the way heard and presented through “jazz ears.” It’s Stories of Standards, weekday mornings at 7:50 and 8:50, only on KUVO JAZZ.

The Stories of Standards segments are sponsored by Listen Up.