With high level politicos like Clinton and Obama White House insider John Podesta currently claiming it’s time to open the book on the question about the government’s investigations on UFOs, perhaps we should all stand up and take, for once, real notice. 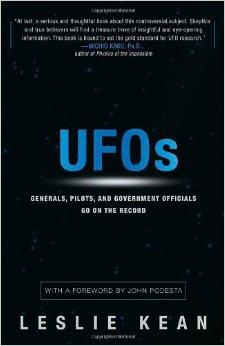 To do so, readers need look no further than Leslie Kean’s wonderful book UFOs – Generals, Pilots and Government Officials Go On The Record, a book that is about as good a distillation of the UFO issue as one can find.

In it, Kean strips away the irrational layer of secrecy that has always surrounded the UFO controversy – citing that the many years of discoveries and the close encounters that pilots, high-ranking military officials and government officials  have with UFOs demands no less.

The term “UFO” itself, Kean points out, has been misused and abused over the years.  So much so, that the word and its bold, identifying capital letters have become part of pop culture.  Kean deftly instructs readers that the term “UFO” certainly does not carry with it the mandate that any UFO represents an extra-terrestrial spacecraft.