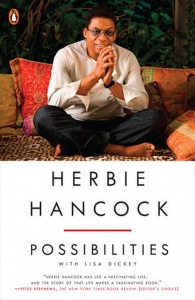 In this book, Possibilities, by Herbie Hancock, the words seem to flow as the author’s music career has evolved—smoothly and naturally. Herbie’s musical talent was apparent at age eleven, when he won a contest right to perform with the Chicago Symphony Orchestra. An early aptitude for understanding technical material and analysis, plus joy in taking things apart, foretold a career in engineering. His practical parents used an uncle’s South Chicago address in the Hyde Park High School district to qualify him a place at a desired school. His classes were easy. Herbie says he practiced piano sometimes and studied music practice and theory a lot. At prestigious Grinnell College he set out to study engineering. He tried to go the academic casual route while exploring the music world, but his grades suffered; he left school when nearing graduation, and moved to New York City.

Herbie had overcome the segregated school condition in the City of Chicago. My memory of the black neighborhoods is that the school buildings were inferior and campuses dreary in comparison with the white schools in Chicago—this reflected the conditions of the segregated neighborhoods. The county property tax base and bond funding could have served equality, but unequal and unjust utilization of public resources was the reality. A second challenge overcome was his Mom’s bipolar disorder—Herbie has no complaints about parents and the relationships are good.

A high school classmate advised him how to play jazz; get George Shearing’s new album, listen closely, and mimic. This worked–he was hooked and advanced rapidly, playing briefly with Coleman Hawkins and with the experimental player Eric Dolphy; ultimately, Herbie became a member of Donald Byrd’s band. Byrd gave Herbie two useful tips: first, to play faster, write out the twelve-bar-structure of a familiar blues form, “. . . then practice what you have written on the page, playing it over and over again, and then doing it faster.” Secondly, with Herbie already displaying song-writing talent, Byrd had him form his own publishing company—this was prophetic, for Herbie was soon contracting with Blue Note to record original compositions including the commercial successes “Watermelon Man” (1962) and “Maiden Voyage” (1965). Herbie denied Blue Note the coveted publishing royalties, but closed a recording deal.

The valuable mentorship continued with the Miles Davis Quintet (MDQ). You will detect similarities in the careers of Miles and Herbie, as each worked to avoid career depressions during the demise of straight-ahead jazz. They each carved niches in the rock/pop culture, embraced the use of electronic instruments and recording technology, and spearheaded the jazz fusion movement. As leaders, they adopted a hands-off approach to the creative excursions of their hired band personnel—just play with your heart and show up on time.

Hancock made advances into the avant-garde movement with his band Mwandishi—the sextet opted for Swahili names and donned dashikis in deference to the African roots style. Personnel included Buster Williams, Bennie Maupin, Julian Priester, Eddie Henderson, and Billy Hart; later, a white PhD synthesizer magician named Pat Gleeson was added. Herbie writes, “I think of Mwandishi as an R&D band . . . It was all about discovery, uncover, exploration, the unknown, looking for the unseen, listening for the unheard.”  Although the band loved teasing out the far-out sounds and harmonies, public attention was lacking. “When Mwandishi was off, the experience was not pleasant, and what we were playing just sounded like noise, even to us.” Ever-cognizant of changes in synthesizers and sound engineering, Herbie took his band (with a new makeup) into danceable rhythms and scored a huge hit that spread from Black colleges westward; the band was Headhunters (HH, Bennie Maupin, Paul Jackson, Bill Summers, and Harvey Mason). Herbie formed the group as a straight-up funk band, but the member backgrounds were very jazz-based, and Herbie soon realized “we were turning into a jazz-funk fusion band.” At the time, the album Head Hunters became the biggest selling jazz LP ever. Reading on, you will find other music style adaptations occur in a career punctuated with many Grammies and an Oscar for composing the film score “Round Midnight.”

Hancock describes his long-term commitment to the practice of Buddhism, an until-now-concealed crack cocaine addiction overcome, and his friendships with great musicians (e.g. Stevie Wonder, Wayne Shorter, Chick Corea, and Joni Mitchell to name a few). Life is good–there is no bitterness expressed here and but one living musician is taken down a notch or two; attribute that to two over-achieving and conflicting personalities and the competitive spirit—it all makes for interesting reading.