A Record Story—”Abraxas” by Santana 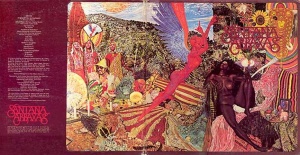 Santana’s 1970 sophomore album titled Abraxas has cover art that is a visual delight which matches the music contained within.  The cover art is both cover and back art.  The painting is titled “Annunciation” and was painted in 1961 by Mati Klarwein in New York.

Carlos Santana named this musical production Abraxas after a line in Hermann Hesse’s book titled Demian. Hesse’s characters find a mystical and mysterious painting and name it Abraxas.  Araxes is from the ancient Greek religious beliefs and deities.

This painting represents life and death, joy and fear. I have found that after more than 50 years of enjoying this cover art, I am still discovering new visuals and reignited emotions.